Ship modeler and commodore of the Hyde Street Pier Model Shipwrights, Paul Reck, has been a busy bee with his ship modeling projects. But, that’s nothing unusual for him. Paul recently put the finishing touches on a 1/4″ scale model of a U.S. Navy Anchor Hoy from the early 1800s. His model is based on a drawing and notes found in the book American Ship Models and How to Build Them.

Paul Reck explaining the details of the Anchor Hoy at the April meeting.

The Anchor Hoy served as a yard boat for provisioning ships and was fitted with a large fresh-water tank for this purpose. Being specifically an “Anchor” hoy, she was also fitted for hauling the massive anchors used on large warships. A pair of capstans aft were connected by gearing, allowing a smaller number of sailors to haul the heavy anchor, which was held over a great cathead that extended out over the bow.

Paul’s model is copper sheathed, like the original boat. Because of the enormous size of the anchor, he had to come up with a special stand in order to allow the anchor to hang properly. 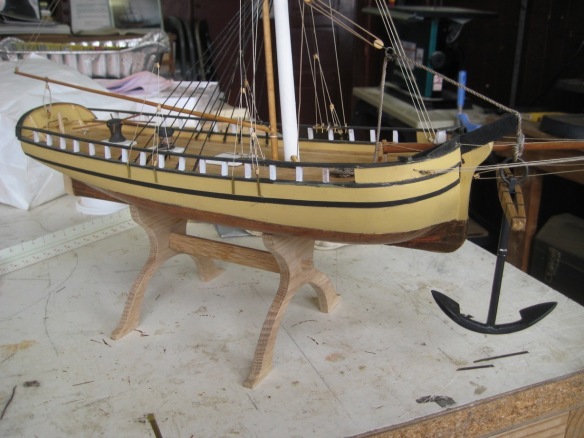 From the April HSPMS meeting. This is before the anchor hoy was completed, but shows off the full mast and gaff.