Nice to see a build of this kit. We haven’t many of this company’s models built, but here’s a build of Disar’s Spanish galleon kit the Santiago de Compostella.

Customer Glenn Standfield chose Disar Model’s Santiago de Compostela Spanish galleon kit to be his first wooden sailing ship model, and he began his build with a kit he purchased from us back in August of 2021. Here it is, August 2022, and we just discovered that he’s been keeping a very nice build log on the ship model forum Ships of Scale. 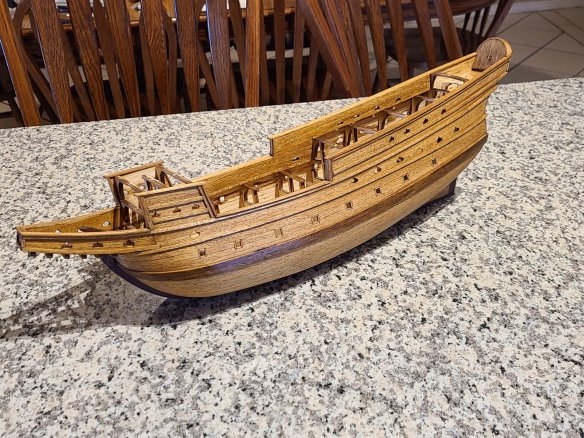 Glenn began his model back in September of 2021. It is his first wooden model ship build, and we think he’s doing an awesome job with it.

As a first time wooden ship modeler he’s faced some new challenges, but he’s done a great job overcoming them. Particularly impressive is how well he made the unusually shaped upper gun ports. That must have taken a lot of careful filing.

The finish of the deck…